I’m back! This week has been really busy, but in a good way. A lot of the happenings this week revolved around the “Thin Blue Line,” my husband’s profession and second family. Over the past few years I have been witness to police officers and their families come out in support of each other; fundraiser/auction for an officer battling cancer, officer funerals, etc. This week was more joyful.
Most people have heard the term “Thin Blue Line,” but do you know what it means? I Wikipedia’d it for you:
The Thin Blue Line is a symbol used by law enforcement, originating in the United Kingdom but now prevalent in the United States and Canada to commemorate fallen officers and to symbolize the relationship of the police in the community as the protectors of the citizenry from the criminal element.
Each stripe on the emblem represents certain respective figures: the blue center line represents law enforcement, the top black stripe represents the public whilst the bottom represents the criminals. The idea behind the graphic is that law enforcement (the blue line) is what stands between the violence and victimization by criminals of the would-be victims of crime.[1]
Proponents of the symbol assert that the identifier is intended to show support for police.[1]In the wake of controversies over police shootings, the Thin Blue Line Flag has become popular among law enforcement personnel, their families and supporters.
Wednesday, the University Police Department presented their first ever spring break safety event to university students. They had a fantastic turn out with roughly 400 students (pretty unheard of if you’re not providing free food or t-shirts lol)! Feedback from the students was positive. The officers put on a good, interactive show that spoke right to students through trendy songs, saying, and videos. At the same time, they delivered a positive message about staying safe during spring break. Following the event, the group had what I like to call “UPD family dinner” which always proves to be a fun time.
Thursday, a former UPD dispatcher graduated from the police academy and will begin his full time job as an officer on Monday! The hubs and I attended the graduation ceremony with about 15 others from the department. The turn out of officers, supervisors, and dispatchers was really great to see. UPD is proud to welcome a new officer to the family.

On a more serious note, a police officer has been diagnosed with ESRD End-Stage Renal Disease, kidney failure. A GoFundMe account has been set up and has raised over $20,000 in less than a week. It’s a long way to go to getting him a new kidney, but please take a minute to read Roy’s story and consider donating. I understand not everyone can make a donation, but you can share the story through social media to spread the word.
Thanks for visiting. To all officers, stay safe out there! Until next post…
xoxo Becca

Busy and productive weekend y’all! Saturday morning I woke up early to get a pedicure. I prefer going when the nail salon first opens, it’s less crowded and as a result much quieter. There’s nothing more relaxing than a quiet pedi. I opted for a spring color since the weather was warmer (that was short lived…39 and cloudy now). Fact, I love to read the names of the nail polishes. The last one I had was an OPI color called Vant to Bite My Neck, a dark purple color. So vampy lol This weekend’s color is called “Berry Blast” less exciting, but still a pretty Barbie pink. 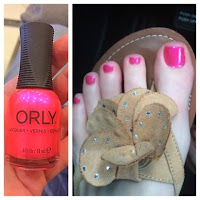 Next I went shopping. I had 2 birthday gifts to pick up for friends, plus a few gift cards to spend on myself (thanks hubs). After 4+ hours of shopping I came home with some great sale items and the gifts I needed. First up, a Fossil crossbody bag I have been eying for months. My coworker owns it in “mushroom” and it’s fabulous. Macy’s was having a 1-day sale so instead of paying $198, I paid $80 (pat on the back).
Next up, a top from Banana Republic. It was my first time shopping here and I fell in love with this dress, just waiting for a sale. The hubs bought me a cropped sweater for Christmas and I needed something to go under it. This racerback style (on sale for $20) will look great over jeans or these Loft pants I recently purchased.
Then a trip to TJMaxx was in order and I got this great shirt for $13. Not my usual style, but ultra soft and perfect for a casual outfit.

After shopping it was off to a friend’s surprise birthday party. Sunday I spent cleaning, catching up on some TV shows, and watching the Oscar’s Red Carpet. Ali Fedotowsky, I agree with your favs. 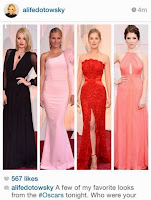 Have a great week everyone! Until next post…
xoxo Becca